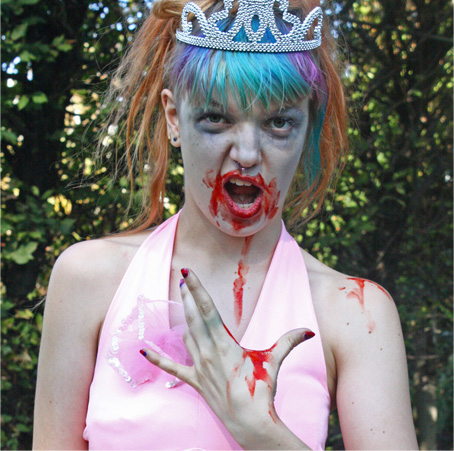 I googled the questions - Why do we dress up on Halloween? and got the Wikipedia entry on  Halloween Costumes .   "The wearing of costumes at Halloween may come from the belief that supernatural beings, or the souls of the dead, roamed the earth at this time. The practice may have originated in a Celtic festival, held on 31 October–1 November, to mark the beginning of winter. It was called Samhain"  "From at least the 16th century, the festival included mumming and guising,  which involved people going house-to-house in costume (or in disguise), usually reciting verses or songs in exchange for food. It may have originally been a tradition whereby people impersonated the Aos Sí, or the souls of the dead, and received offerings on their behalf. Impersonating these beings, or wearing a disguise, was also believed to protect oneself from them."  So, think on that the next time you put on your Batman mask and go trick or treating.

As we know Halloween costumes have evolved from homemade to more sophisticated and from simple to outlandish characters.   I applaud the creativity and effort but I do miss the days when we'd put on our dad's shirt, one of his hats add a red nose and call ourselves a Clown. Or wear one of mom's old gowns, a string of fake pearls, and gloves and we were a Fancy Lady.    My family kept a dress up box so we could put together outfits all year.

If you are curious to learn more read at Wikipedia  Halloween Costumes - it goes through the whole transition and history of dressing up at Halloween.

Drew Carey says: "I'll bet living in a nudist colony takes all the fun out of Halloween."